I made a bobbin lace bolster, I don't like running out of space.

I cut 1 rectangle 84.5 by 63 and two 28cm circles (I used a large dinner plate) out of calico you could cut 4 circles from polycotton and stitck together for the ends

I sewed right sides together and then sew one of the circles in with calico and polycotton.  Making the seam allowance smaller on the polycotton.  I put a channel on the other end of the pieces to thread cord through

I put the sawdust in the calico trying to compact as much as possible.  Hitting the cushion with the rolling pin.

Once the inner was stuffed I place one the other circle on top and drew the cord tightly .
I then wrapped a cot blanket around it and put the cover on.

I have created about 7cm of lace I find that it is harder to put pins in than polystyrene.  maybe and old camping mat might have been a good idea or some oven glove inner 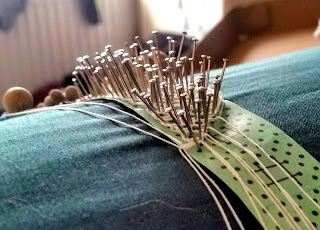 it works if a little bigger than I expected